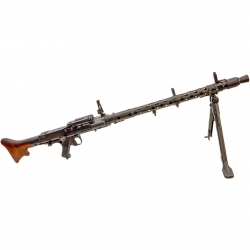 WE HAVE MORE COMING IN JANUARY!

ORDER TODAY AND WE'LL SHIP THEM AS SOON AS THEY COME IN!

An exacting reproduction of the infamous MG 34 machine gun, made of metal, wood and plastic, with simulating loading and firing mechanism, and mobile bipod.

The MG 34 (Maschinengewehr 34) is a German recoil-reloading and air-cooled machine gun, introduced in 1934. It is considered the world's first general-purpose machine gun (light, bipod-equipped and heavy, tripod-equipped). It is capable of sustaining a high volume of fire, without sacrificing movement speed, or tactical flexibility. It was in service from 1936 to 1956.

The main design of the MG 34 was carried out by Heinrich Vollmer of Mauser, who was based on a model by Louis Stange of Rheinmetall, which had just entered service in Switzerland.

The German Army had managed to manufacture a multipurpose machine gun, and with which their divisions, both armored and infantry, were equipped. Even the German air force used a version of the same model, albeit modified for use in aircraft. Only about 350,000 units were manufactured due to their high cost due to their laborious and careful manufacturing.

Today, there are still many armies in the world that employ machine guns developed from the basic configuration of the MG 34.

Its probably one of the best additions to my giant collection. Replica Guns Direct was great in emailing me info on when the pre-order would be available. Fast shipping once they received their inventory.