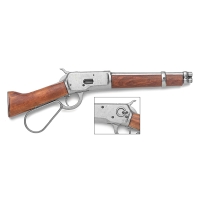 This is the cut-down version of the loop lever 1892 that was made famous in the TV series "Wanted Dead or Alive". Our authentic replica rifle features an antiqued grey receiver with saddle ring, working lever action, wood forestock and cut down shoulder stock, cut down 10" metal barrel, and metal butt plate and barrel ring.

This is a must have classic for the old west collector and has never been available before at this price!

This gun is everything I hope for. Very realist, looks and feels real. I would recommend this gun to a friend.
Related Products