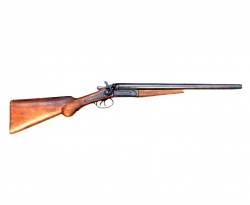 This is the world famous Coach Shotgun!  If you’ve ever called “SHOTGUN!” getting into a car, this is where it all started. The Coach Gun received its moniker on the stagecoach runs of the Wild West, when outlaws and Indians targeted lonely coaches on long and uncertain trails through difficult and often hostile territory.

The need for effective security and defense was clearly established, and stagecoach companies quickly implemented the use of guards to ride along side the driver carrying a weapon that allowed for some leeway in accuracy as they bounced along the bumpy trails. “Riding Shotgun” became known as a hard and sometimes fatal occupation.

Cut-down versions of the Stagecoach Shotgun were also popular among Marshals and Sheriffs throughout the frontier for their mobility and lenient accuracy at close quarters. Bandits and drunken gamblers thought twice about their actions when staring down the eyes of a double barrel shotgun.

This non-firing replica Coach Gun has an authentic time-worn appearance and realistic action that mimics the double barreled, percussion cap action of the original 1881 design. . The hard wood stock and antiqued metal barrel and furniture look just as they would have heading out on the dusty trail.

Thumb the top locking lever to the side and you can “break” open the gun to reveal the lead-spitting barrels of this close-quarters defense weapon. Close and lock the barrels and cock both hammers. Finger the double triggers one at a time and the hammers will fall. On the plains of the late 19th century there was nothing else like the sound of a shotgun hammer. The realistic weight, feel and action of this legendary Old West tool will transport you back to the Dakota Territory, when your trusty shotgun was your last and best line of defense.

Commonly used in the old west on stagecoach runs to protect the cargo and passengers.

Wyatt Earp used this shotgun at the OK Corral.

This gun is superb their is not one single promblem with this gun. I feel just like Clint Eastwood from unforgiven when i hold this gun
Joe on 04/03/2010 09:33am

I just received the Stage Coach shotgun and I am very pleased. It is one of the best reproduction guns that I own. I plan to order the smaller sawed-off shotgun next.