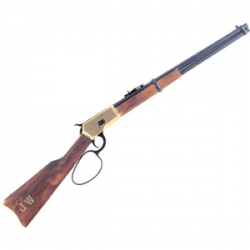 The 1892 rifle, descendant of the 1866 rifles,was made from 1892 until 1941 and total production was in excess of one million pieces. Many variations and calibers were introduced over the course of the 50 years production, but the basic design was largely unaltered and the fact that many are still in use today as hunting rifles bears testimony to the reliability and longevity of the gun. This non-firing replica clearly demonstrates the workings of the famed lever action.

Thanks for sending me such a nice lever action model 1892 with a loop lever. Such nice and fancy looking wood, rifle absolutely feels 100% real and handles just like the original which costs over $1000.00 per copy. If you were out to make a non-firing replica, you could not make a mistake duplicating this model. I really like it, thanks for packaging it so well also.
Loading Tweets...