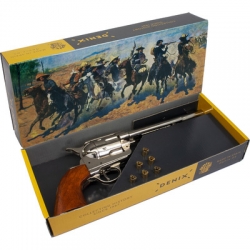 The 1873 the single-action army revolver was produced in several forms and many calibers from 1872 to 1940, with production totaling about 350,000 pieces. As its introduction coincided with the settlement of the Wild West, the names Peacemaker and Frontier Six-Shooter were popularized. Used by legends like Buffalo Bill Cody, Wild Bill Hickok, Pat Garret and Bat Masterson it was also the weapon of choice for settlers in the West during the late 19th century. The Cavalry Models relatively long barrel provided excellent accuracy in capable hands.

Designed perfectly to the size and weight of the original, this replica features real working action of the cylinder, hammer, and trigger, and an antique grey or nickel finish that adds a touch of authenticity. From the 7" cavalry barrel to the beautiful wood grips, the Colt Cavalry 1873 is the centerpiece of any Western handguns collection.

This high-end replica revolver is also designed to fire caps. When used in conjunction with the included Denix Cap shells, you will have one of the best cap guns available anywhere today! These are not toys made for children.