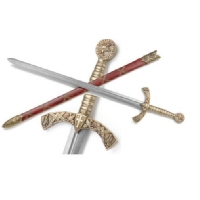 The KNIGHTS TEMPLAR is thought to be a secret body of Crusaders charged with protecting the deepest secrets of Christianity...and that they remain in existence today protecting the bloodline of Christ. More traditional interpretation of their origins suggest the Templars were established in the early 12th century following the First Crusade and were charged with protecting Christian pilgrims on their way to the Holy Land.

Though they counted only 9 among them for nearly a decade, their service soon gathered them royal favor and their numbers and wealth soared. For nearly 200 years the Templars grew in strength, wealth, and numbers, until their extinction was mandated by Pope Clement V and King Philip IV of France out of fear of their growing power.