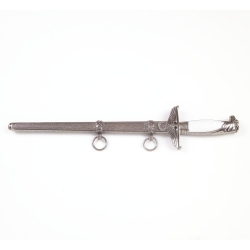 The production of this dagger was authorized by A. Hitler in May, 1938 to commemorate his visit to Rome. The dagger is formed by a stylized eagle on the pommel with pearl oyster on the handle. Later, this colour is degraded to yellow and orange. On the cross, the national eagle with spread wings, facing right and holding the symbol of the Third Reich in its claws. The silver case is identical to the dagger of the Navy, but has the ring of suspension in the form of larger oak leaves.

This dagger was used by Nazi diplomats of foreign affairs focused on the Third Reich and German government representatives at international level.

The annexation to the empire of Rhineland, Austria, Czechoslovakia, Memel and the sign of several non-aggression treaties with Italy, Japan and Russia, testified the effectiveness of the German diplomacy led by Von Ribbentrop.