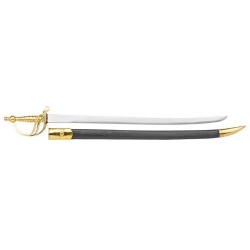 The Bunker Hill Sword was designed in memory of the battle of June 17, 1775, when William Prescott commanded 1,500 Colonials in a bitter-fought defeat that showed commands from both sides that the rag-tag Colonial Army was capable of standing its ground against the British ranks. Oddly, the battle did not actually occur on Bunker Hill, but on nearby Breed's Hill.

This Revolutionary War Sword features a 24" carbon steel blade, brass handguard and pommel, and is complete with leather scabbard with brass fittings.