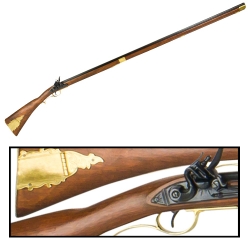 Originally designed and built in Pennsylvania in the late 1700s. These rifles were popular from the Revolutionary War to well into the 19th century. They played an integral role in the early western expansion and are most often associated with Daniel Boone and Davy Crockett. The Kentucky rifle was one of the first to feature a "rifled" bore which made it extremely accurate for its time.