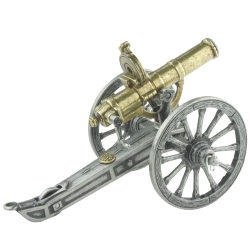 IN STOCK AND READY TO SHIP!

Our Desk Top Gatling Gun is of 1861 design and is superbly detailed. Gun features an all metal construction.

The Gatling gun is one of the best known early rapid-fire weapons and a forerunner of the modern machine gun. It is known for its use by the Union forces during the American Civil War in the 1860s, which was the first time it was employed in combat.

The Gatling gun's operation centered on a cyclic multi-barrel design which facilitated cooling and synchronized the firing/reloading sequence. Each barrel fired a single shot when it reached a certain point in the cycle, after which it ejected the spent cartridge, loaded a new round, and in the process, cooled down somewhat. This configuration allowed higher rates of fire to be achieved without the barrel overheating.