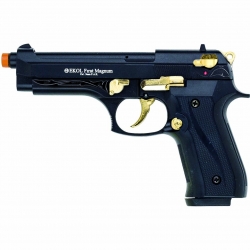 The Firat Magnum 92 front firing blank gun is modeled after the Beretta M9 pistol, which is the chosen pistol of the United States military. The replica blank firing gun features a black and gold engraved finish. Like the original, it is a semi-automatic pistol, which means once properly loaded, every squeeze of the trigger will recycle a round from the ejecting clip. It loads 9mm PAK blank cartridges, which ensures that when fired, the look, feel, and sound will make you feel like you are firing the real deal.
How our front firing blank gun works: Pull back the slide to load the first blank into the chamber. When the last blank is fired, the slide will lock back just like the real thing. Blank shells are ejected from the top of the barrel after each shot. This front firing blank gun has an orange blaze at the front of the barrel in accordance with Federal Law. Fires both single and double action. This front firing blank gun can be disassembled by a qualified gunsmith, but it cannot be made to fire real ammunition. Will hold approximately (14) 9mm blanks in the magazine and (1) 9mm blank in the chamber. You must be 18 or older to order and 21 or older to sign for the package. It complies with ATF regulations and has been approved by them for sale in the United States. No federal license required.